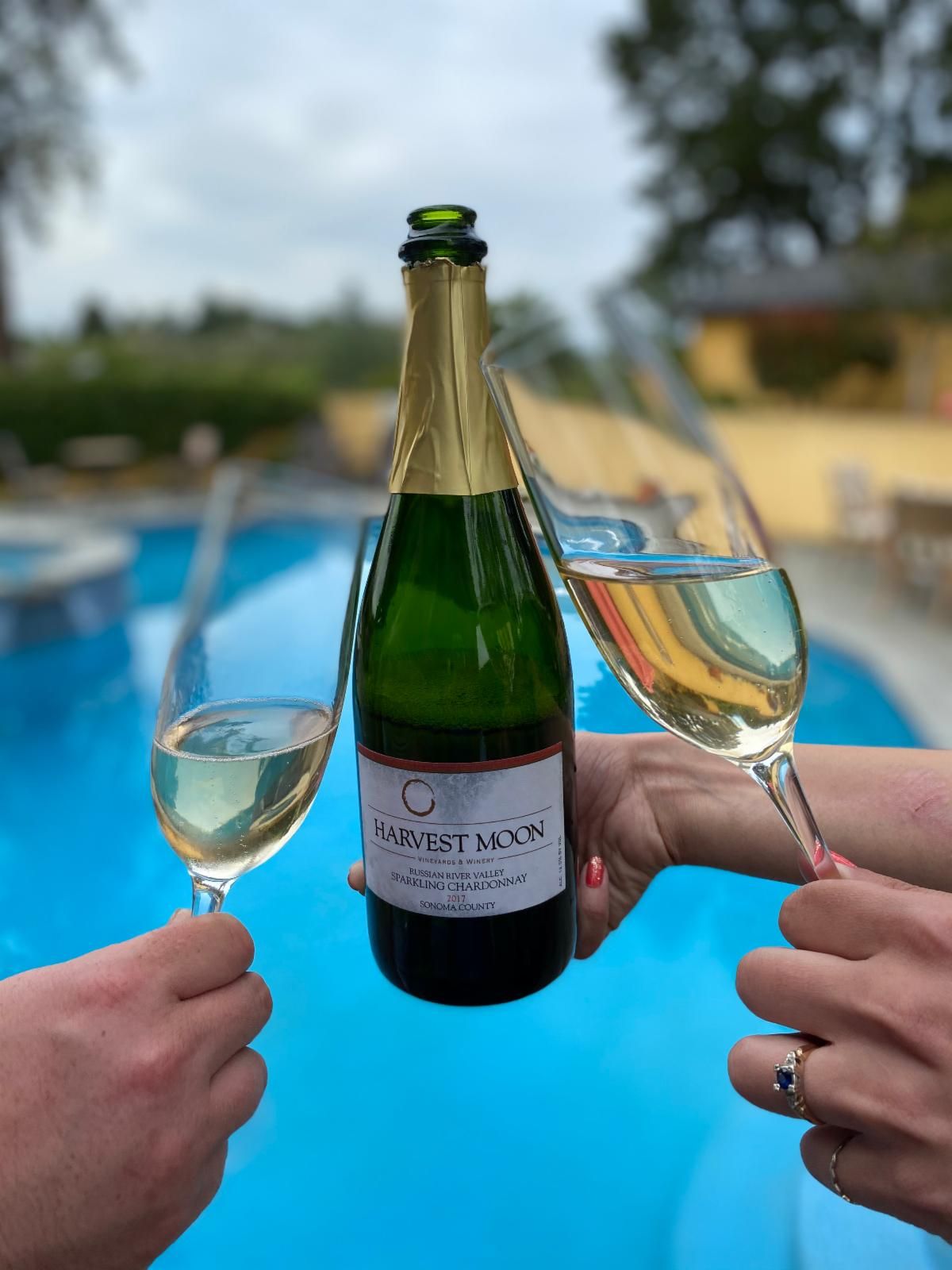 At Harvest Moon, winemaker Randy began making sparkling wine in 2000 using the Champagne method, or méthode champenoise. Because Champagne houses demand that the term champenoise be used only for Champagne, this method must legally be called méthod traditionnelle outside the Champagne region. The méthode traditionnelle is the classic method for making sparkling wine. It is generally believed to make the highest-quality, longest-lived, most complex sparkling wines in the world. It is also generally the most expensive, labor-intensive, and time-consuming.

A great deal of care must be taken when harvesting the grapes, because only the best grapes are selected for bringing to the presses. Many serious winemakers insist on hand-picking the grapes to facilitate the selection process and ensure that none of the grapes are bruised or damaged during picking or transport.

When it is time to press the grapes, whole clusters of grapes are pressed at once, but the process is very slow and gentle so the delicate juice retains all its freshness. There may be as many as three separate presses, with each successive pressing producing juice that has less acid and more tannin. The next step in the process is fermentation, and juice that has been freshly pressed is fermented immediately in cold temperatures, generally in large steel tanks. A smaller amount is sometimes fermented in old oak barrels in the traditional manner.

During the fermentation process, yeasts are used to convert sugar into alcohol and carbon dioxide, and this produces a base wine or a still wine, as it is sometimes known. The assemblage process is sometimes called The Winemaker's Expression because it is the most artistic step in the entire winemaking process. At this point, winemakers generally taste about 100 different base wines in order to craft specific blends of their choosing.

The final result is a reflection of the winemaker's personal vision for any given wine, and this could be from the standpoint of retaining consistency, or with a view toward developing a unique wine from this year's crop. After this artistic step, the wine is bottled in thick glass bottles that are then sealed and capped. This sets the stage for a second fermentation phase, which happens automatically as the bottles age.

While the bottles are resting, the yeast is at work the entire time producing more flavor, carbon dioxide, and alcohol. Since the bottles are sealed, no carbon dioxide can escape, so it becomes infused into the wine and produces bubbles. This is the step when the actual sparkle is introduced into sparkling wine and it acquires its distinctive style. This is also the time when additional flavor and aroma are introduced into the wine, and the longer this second stage fermentation is allowed to continue, the richer and more delicate the wine produced.

In the next step, called riddling, each bottle is gradually tilted downward and rotated in small increments. The yeast is constantly at work and multiplying during the fermentation process, producing sediment in the bottle. The riddling process removes the sediment from the wine and releases proteins that modify the wine flavors from simple fruitiness to flavors such as creaminess and nuttiness.

Following the riddling phase, the yeast deposits that have collected in the bottle's neck are removed by freezing the upper part of the wine bottle. Then the bottle is unsealed so that the pressure will eject the yeast and leave behind a wine that is perfectly clear. Following this, a good sparkling wine is generally finished with a slight blend of reserve wine and cane sugar, and that helps to determine the ultimate style and personality of the sparkling wine produced.

This is another artistic step in the winemaking procedure, and it helps to define the ultimate style of the wine, whether that be a drier wine or a slightly sweet one. After this, the cork is added and wired in and the bottle is allowed to rest for several months so the wine can recuperate. It's also important to allow this rest period so that the reserve wine added in the previous step can fully integrate with the rest of the sparkling wine.

The last step in the process is simply to allow this high quality sparkling wine to age gracefully. The winemaker decides when the wine has aged long enough and is ready to be released.

Making sparkling wine in the méthode traditionnelle is a very long and labor-intensive process, but the end result justifies all the work and time invested in creating the wine. Winemakers are extremely meticulous about every single step involved in the creation of a good sparkling wine, and it becomes a labor of love to ensure that each step is performed according to exacting standards. In this way, a true work of art can be produced, and a world-class sparkling wine can be the result.